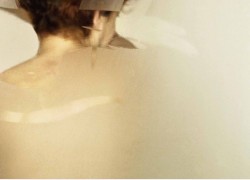 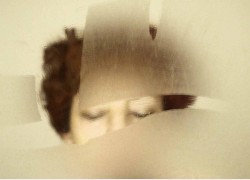 Initially, nothing was very structured. I had thought of doing a series of self-portraits. It was just an impulse, the idea of a project on age advancing, ineluctably. But after seeing the first printed proofs, some new and quite different perspectives presented themselves to me.

I then recalled an earlier photograph which I had called: “the ghost”.  It represented my shadow.  It was no doubt the recollection of a past in which my own image was still evanescent, almost unreal.

I realized later that this shadow, this ghost, probably corresponded to what my father – whose vision was weak – saw of the world. An accident in his childhood, then a veiled, blurred vision, which grew increasingly darker with age.

His sight difficulties, his low vision, were at the origin, I guess, of my desire to become a photographer and induced both the style as well as the form in my photographic writing. What is shown here, in fact, is a sort of partial and biased inner image. It is a truncated representation, pierced with holes and words. This work was a revelation: my father’s vision lurking in the shadow of my own.

Very recently I have realized that my fortuitous discovery, linked to this series, could be likened to a process bearing a learned name: serendipity. *

*Serendipity: the capacity or art of making a discovery, in particular a scientific discovery by chance; the discovery thus made (Larousse dictionary)